Last December was my daughter's 18th birthday. She wanted a Spy theme with travel and casino motifs. Now how hard can that be! Lol. After knockin' my brains out for ideas, the following were some of what I came up with, with the help of my family of course, particularly my ever loving and supportive hubby.
Since a spy go for different disguises, I hired a make-up artist, fashion stylist and photographer for her photoshoot, 3 weeks before the event. Her fashion stylist came up with 5 different wardrobe changes. I used her different looks for the invitation, backdrops and souvenir tags with the colors-black, red and white.
THE INVITATION
I tri-fold a faux leather design black board paper, attached the ends with double back tape with the exception of the top portion. This serves as an envelope with only a strip of black board paper as the flap cover. To keep the flap closed, I printed small red question marks on a sticker paper, glued crystal gem on the dots and used a circle puncher for the shape. I also printed on a sticker paper the TOP SECRET label and attached it on the front. Wasn't able to get the site where I downloaded the label but here's one for a reference. 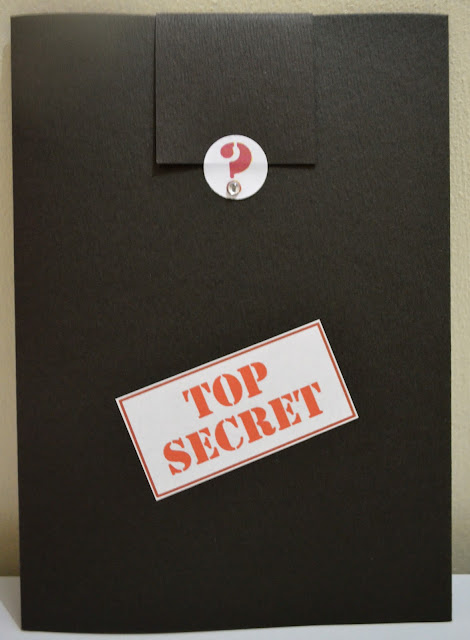 When the flap cover is opened, a James Bond eye logo will be revealed. I replaced the image of James Bond with a picture of my daughter. 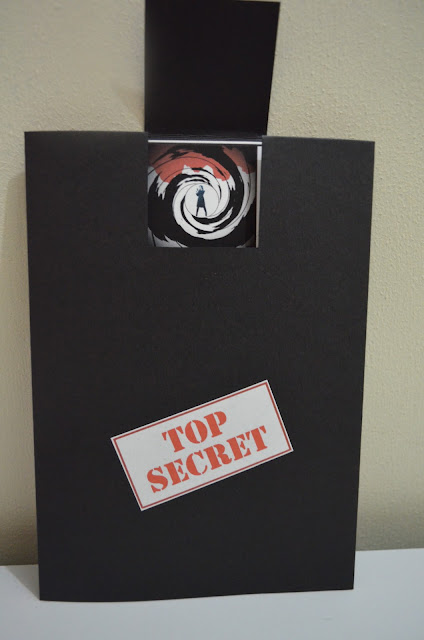 Upon pulling up the card with the logo, the entire inside portion is revealed which contains the party details. I used 18 different images of my daughter, including the one with James Bond logo as background for the card. The images, except the logo, were printed with 40% opacity in black and white. Instead of using the usual invitation terms, I replaced them with spy terms such as mission, identity and disguise. The CODE features different spy movies and serves as guide for the table seating. As soon as the guests come in, they have to say the code to the usher and they will be seated accordingly. 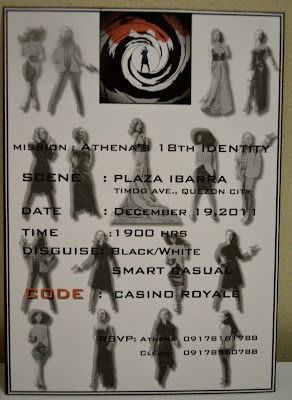 THE WELCOME BANNER
The Welcome Banner featured one of her spy looks. This was placed at the entrance of the venue. The size is about 5.5 feet tall and supported by a gold frame. 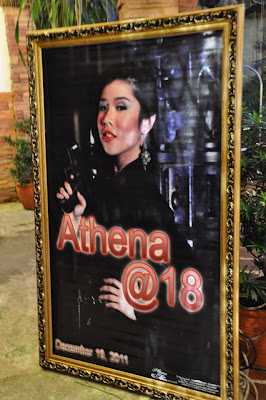 THE BACKDROPS & PROPS
Four of the different wardrobe changes during the photoshoot were used as backdrops for the venue. The size is about  5 x 3 feet printed on a tarpaulin in black and white and supported by a wooden frame at the back. 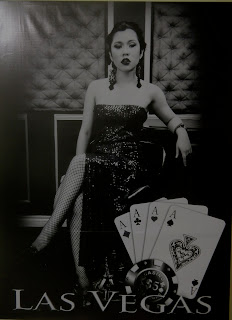 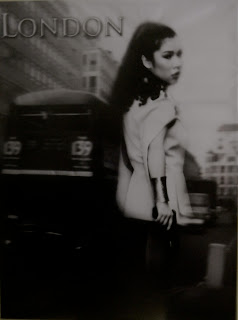 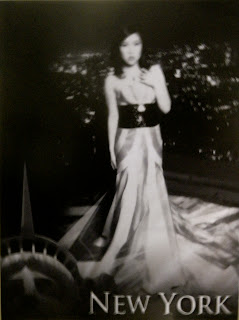 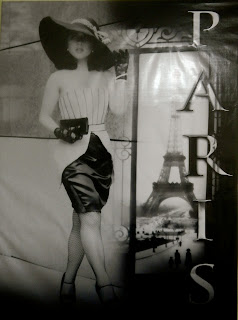 These were placed on the recessed wall on both sides of the stage.

Life-sized spy men and women silhouette standees also served as props for the venue. I placed 2 at the hall entrance, 1 at the Bar (vaguely seen inside mirror) and 2 on the stairs. 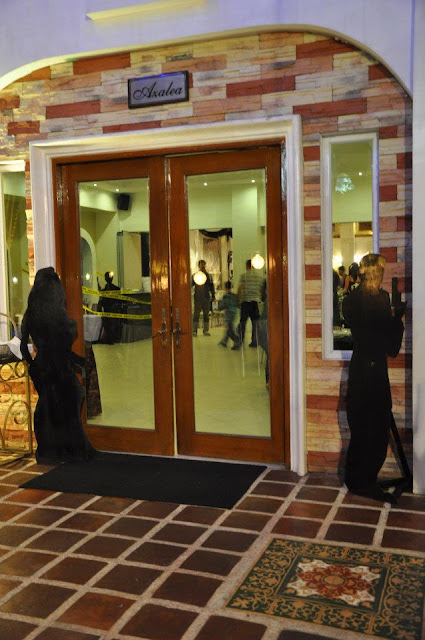 TABLE DECOR
For the table decor, I downloaded 15 different spy movies, printed them and laminated for the 15 tables accomodation. I have large sizes of playing cards that I've been keeping for a while and I thought of using them as table place cards by arranging them like a fan together with the laminated spy movies. Here are 2 examples of them: 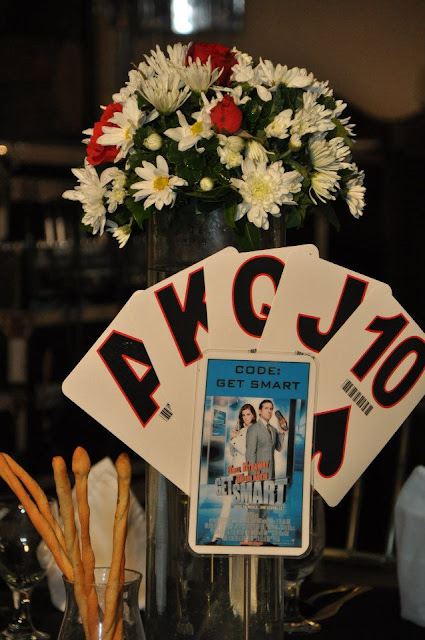 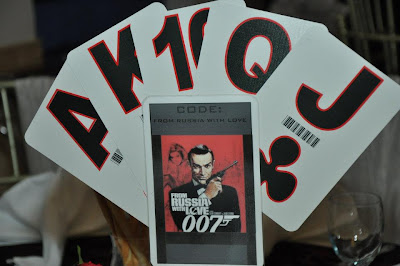 THE CAKE
Her cake was a Casino Playing Card inspired. Also in the picture is the backdrop for the stage which is a James Bond logo with her at the center of the eye. 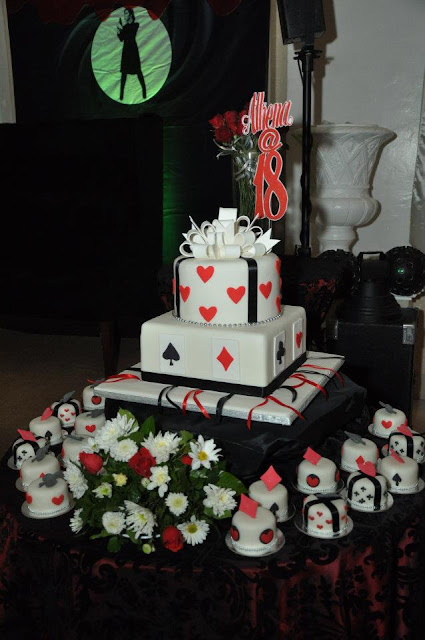 The mini cakes were lighted by 18 of her friends as they each reveal an "identity"(characteristics of Athena as they know her) and their wishes for her. From her 18 godmothers, godfathers, aunts and family friends, they each gave her 18 gadgets. 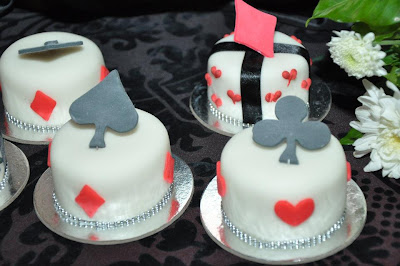 SOUVENIRS AND GIVE-AWAYS
For the guests, we gave away mini fondant "Dice" cakes baked by my loving sistah. They were placed in a square box and decorated with a ribbon and a tag. The cake box is from a local cake supplies store. 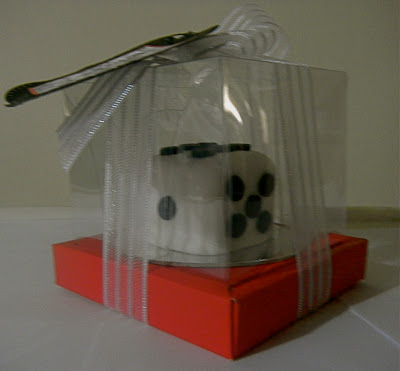 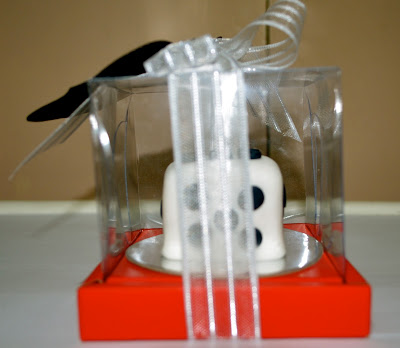 I made a Thank You tag using different pictures of my daughter printed in black and white with red border. I attached this on a shaped black board paper using my favorite Martha Stewart's Punch Around the Page Cherish set. 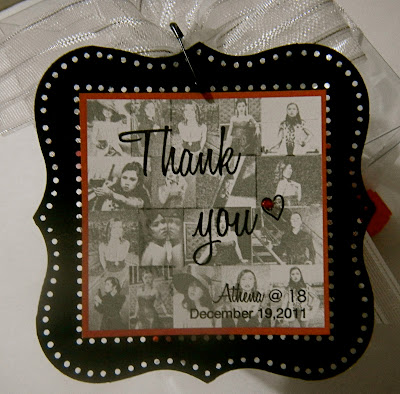 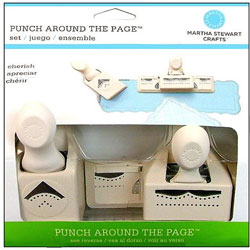 Gave away also lipstick pens for the ladies and Secret Decoder Pens for the guys which I bought from The Spy Museum Store in US. 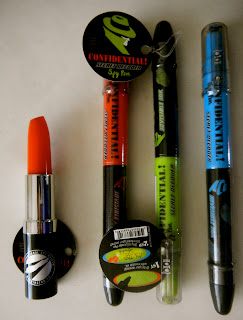 And here's another freebie for you: 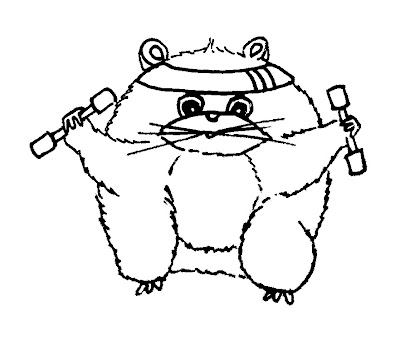 It simply is amazing. I bet she will allways remember that day!!!

Thaks a lot for your comment on my blog!

PS.: I have to show this to my girls at www.die-bastel-musketiere.de ... they will love it!!!

Cleah
Welcome to my blog! I am married and a mother of two. I know there are a lot of creative cardmakers out there and I'm learning a lot from them. I like to share some of my ideas and doodles and hope you like them too. 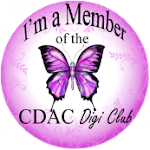 I am a Sassy Saturday Crafter 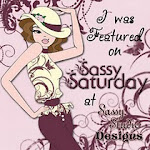 My card was featured at